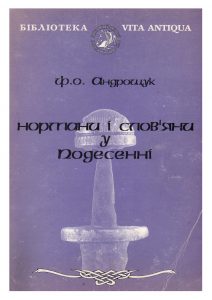 The culture of Kyiv’s Rus occupies one of the most important places in the treasure-house of world culture. The history of its formation reflects the history of Old Rus State and especially the role of international relations of Eastern Slavs with the other regions during the Middle Ages. During 11th- 13th centuries the Old Rus had tremendous influence upon the East, the countries of the Northern and Western Europe and Byzantium. The influence upon these countries differed greatly depending on certain chronological periods. The foundation of Old Rus culture during the period of historical “Rus Land” was previously insufficiently investigated. The foundation of Old Rus culture reflected an intensive process of Slavic ethnogenesis which took place in different ethnic environment. To our mind this point of view helps to solve the origin of the “Varangian problem” for the Old Rus State and sharpens attention on the problem of ethnocultural influence in the formation of the early-urban structure of Kyivan Rus. On the other hand, the problem of searching for possibilities to reconstruct ethnocultural processes which took place in some districts during certain historical periods is no less difficult. The best perspective is the selection of marginal geographic zones which stipulated different cultural traditions during the formation stages of Old Rus culture.